Eggbuckland Vale Primary School are part of the School Games network.  We take part in various levels of competition and hold our own School Games Day annually. We are also members of the Plymouth School Sports Partnership who hold competitions in a variety of activities throughout the year. Please click on the links below for a calendar of events and opportunities.

This year we have 79 children taking part in the running club, all working towards completing a distance of 12.1 miles before running their final mile on the Hoe on Sunday 20th May.

EVPS also has links to other sports clubs in Plymouth, click the link below for a full list.

A new scheme to encourage children to participate in sport has been launched.
Bronze Young Ambassadors are primary school aged children who have demonstrated a great passion for sport or physical activity.
Each of the EVPS Bronze Young Ambassadors have attended training where they were set the challenge of promoting and encouraging other children within the school to be more physically active and live healthy lifestyles.
Mrs Schneider will be working alongside the Bronze Ambassadors this year to support them to promote the positive values in sport, be a role model and organise activities and events within school.

What has been happening in PE and School Sport this year?

Members of the school netball club represented the school at the Citywide High 5 Netball Tournament today (18/1/18) . In our group we played 5 schools, winning 3 of our games convincingly, having a draw in one, and a small loss in the other. Each member of the team played fantastically and they all scored at least one goal each. They represented the school excellently and should be very proud of themselves. Well done all.

Year 5/6 Girls footballing success!
EVPS girls football team played in the first round of the Plymouth Football Association Knock-Out cup on Tuesday 16th January.  The opposition was Knowle Primary school and the game was played on the Eggbuckland 3G pitch.  Despite freezing cold conditions and occasional showers the game was action-packed and played at a high tempo.  Early on both teams looked a little bit shaky (maybe it was the cold!) but once the teams had settled down there were some good passages of play.  EVPS scored first with a well worked team goal finished by Leona.  At half time the team fuelled up on oranges, prepared by Miss Prynne.  Following half time and a couple of substitutions, EVPS went on to extend their lead with a wonderful strike from Clarissa.  EVPS defence was tested with some sustained pressure from Knowle Primary who forced a couple of great saves from Sydney Drake.  Eventually, Knowle Primary had a taste of success scoring a goal minutes before the end.  However, it was too little too late and EVPS claimed the 2-1 victory and will progress to the next round of the cup!  Well done girls, you were outstanding!
Members of the school netball team braved the elements to play a friendly against Compton Primary school prior to the citywide netball tournament next week. All of the team played really well and gained valuable experience from this. Well done all.
Thursday 14th December, our boccia players took part in the final event of the year. See below to read about it.
On Wednesday 22nd November, Key Stage 2 children enjoyed a really inspiring gymnastics assembly led by two of our pupils - Madison and Leah - who are members of Swallows Gymnastics Club. The girls told us confidently about their club and the training they do, as well as showing their amazing gymnastics skills. What a treat!
Our Year 5 & 6 Indoor Athletics team competed in a fiercely fought competition at Eggbuckland Community College on Thursday 9th November. The team competed well and ended the event in 6th place. A big THANK YOU needs to be said to the Reserve team members who stepped in at the last minute to ensure we had a full-strength team on the night.
On Wednesday 18th October some of our pupils visited Tor Bridge High to play Boccia, you can see a report about it below. 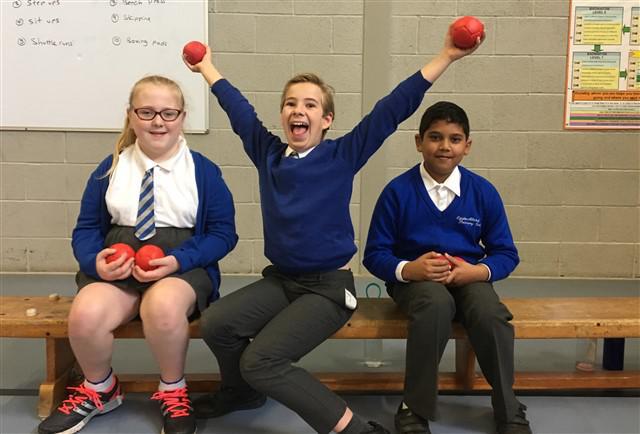 Thursday 19th October brought the Plymouth SSP Level 2 Cross Country Championships at Staddiscombe. Three teams from our school competed at this event in Year 3&4 Girls, Year 5&6 Boys and Year 5&6 Girls categories. All our teams performed really well, with some amazing personal results. Congratulations to all our runners...and Thank You to the supporters who came out in the wet weather to cheer them on!
Year 5 & 6 pupils were given grass-track cycle training by Jonathan from Plymouth SSP before our team was selected to ride at Heles School on Wednesday 27th September. This Go-Ride competition was a new one to us here at Eggbuckland Vale but all our team really enjoyed the experience. Our final position was 10thout of 16 teams.
On Wednesday 4th October pupils from years 4, 5 & 6 ran at the Cross country warm–up event on Eggbuckland playing fields. Despite the muddy conditions, our team ended up with some great personal results.
Year 3 children have been working in PE lessons with Community Cricket Coach, Alex Jopling. They are all improving their bowling, batting and fielding skills through high-energy, fun games.
Top
Cookie information
Cookie Notice